Here’s a salute
to all those
who could not deceive others
with their delicate lies,
who were
just as they appeared to be,
who did not hide behind
cakey surfaces
to earn approval
and validation from those
who did not care
to look beyond
the pretty picture

Here’s a salute
to all those
who were brave enough
to stand just as they were
and were not ashamed
of all the things
that made them
human,
to all those
who did not hide
marks and bumps and ridges
just to appear
more than they were

Here’s a salute
with my middle finger
to all those
who dared put down others
just for having flaws
and imperfections
for being human;
for being themselves 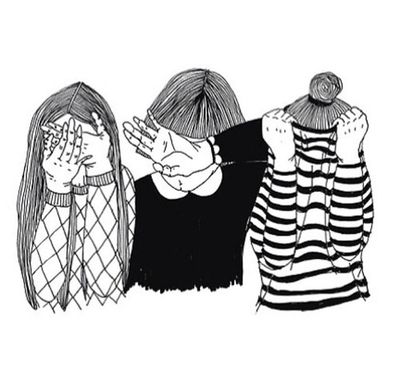 “Jump”, she whispered. And so he did.
Liberated, exhilarated, Freed.
Oh how wonderful it felt. 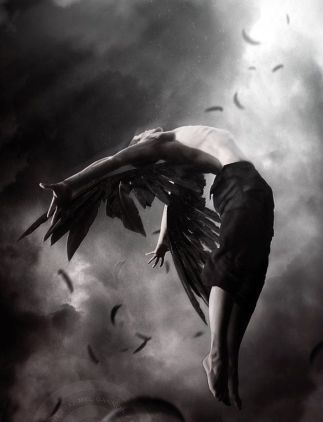 The wind hard against his thighs,
the thighs that held stories,
stories of taunts, and ridicule.
He flailed his hands back and forth,
as if weightless, finally feeling light,
both physically and mentally.
The ground approached fast,
but he dared not look,
for what lay ahead plagued his mind.
Instead, he pondered.
He pondered over how a person
could be demeaned to something worthless,
worthless as an object.
He pondered over where along the journey
the brilliance of his mind
began to be recognized by his appearance.
He pondered over how ruthless the world was
only to recognize soulful excellence
by what lay in the exterior.
He pondered over how his extra inches
in any way determined
how much he could succeed in life.
He pondered and pondered, but in vain,
accepting that no right answer stood.
The ground fast approached.
Almost near enough to touch.
The force that it would exert as he’d land
made him wince.
But, the parachute worked its magic,
and landed him safely to the ground.
Feeling solid mass underneath his feet,
he took tentative steps,
realizing what the world needed:
his weight upon it.
For if it could not stand the burden,
the parachute would have failed to work.

There’s just one thing I want to say to all those ‘fitness freaks’ out there who are trying to “help” and “assist” the fat and overweight people in the world by putting up pretentious videos on how one should care enough about themselves to want to lose weight and live a “healthier” life. These self-righteous dicks verbally attack (“nicely”, of course) fat and overweight people on how they should work towards improving their lives by eating less and eating healthy and should quit “bitching” and “whining “ about it.

Well let me just start by saying, first of all, who fucking asked your help? Did anyone ask the multiple thousand Youtubers/ Viners/’thin’ people generally, to let us know what they think about us and how we should be improving our lives? I could, on behalf of most of the fat and overweight people, easily say NO. Unless you are a doctor or a nutritionist or a health advisor and somebody has come up to you to ask on how to improve their lifestyles, I don’t think anyone has given you any right to make thousands of videos on the internet to “help” us towards a “better” life. And I am not talking about the videos that contain diet plans and exercise routines or self-helps that actually do help people; but those which usually have the face of a caked up blonde girl standing in her bedroom and looking all sexy and stuff out to save the world one person at a time; or some jerk who just hit the gym and felt like he must make a video (showing off his muscular arms) to help ‘motivate’ fat people towards bettering themselves, because if he won’t help them, then who will?.  I, personally, feel attacked by such videos because why always the fat people? Why always the overweight people? What about the too-thin ones? What about the thin and unhealthy ones? What about those who are unhygienic? What about all the other million types of problems that people have and can be “controlled”, like they say?

Second of all, being fat and overweight is not something you can control all the time. So unless you don’t know the medical background of an obese person, YOU do not have any reason to bitch and whine about it. Telling fat people to get off their ass and go exercise is easier said than done. What they fail to understand that there are many fat people in the world who are both fat and fit (I read an article in Readers’ Digest related to this, and the author showed the real meaning of positive body image than these narcissistic assholes). This is because many overweight people DO workout regularly because they want to lose some of the excess fat. It is not always their fault that they are born with slow metabolisms and will gain weight easily (as opposed to their skinny friends who probably eat twice as much). Being fat is sometimes something your body has chosen for you and despite not eating excessively , sometimes that’s just how your body shape will be (unless you undergo excessive crash diets), so losing weight is not an easy job. Of course it may sound easy if some fit Youtuber makes a video on how fat people should lose weight (granted that she is fit and stuff, but maybe her metabolism doesn’t bail on her all the time). Some people suffer from hormonal problems, some people do not have the physical ability to work out and some people’s body just does not cooperate (unless they go to great extents; which in my opinion is not really fair, unless they are doing it willingly, or after being advised by a DOCTOR).

Also, when will issues like being “too” thin be addressed publicly? You cannot surely tell me that starving one’s self is okay? Because essentially that is how anorexia and bulimia starts. How come when I Google anorexia it comes as a ‘disease’ or ‘disorder’, but while searching up overweight, it is simply caused by an act of overeating or eating more than required. Quite biased I must say. And don’t you dare try to call anorexia and bulimia ‘psychological’ problems, because if they can be addressed as related to mental health, then so can being fat. Because, let me tell you, yes, eating can also be addiction, just like binging and purging and starvation. Also, many depressed individuals ‘stress eat’ which results in weight gain and must be addressed similarly to any other mental disability. So next time when you tell a fat person to ‘just go and lose some fucking weight’, go tell an anorexic patient to ‘just start eating’ and a bulimic to ‘quit throwing up their food’.

To anyone who is reading this and carries the same mentality as those people in the videos, these are not excuses. This is just a post to tell you that don’t give us your help by making such videos if nobody asked you to. Get off the internet if this is how you promote ‘self love’ and ‘positive body image’, because I know for sure it’s not making anyone feel better but yourself because you probably think you are helping someone.

Next time you tell a fat person that they should lose weight because it could lead to heart diseases and high blood pressure and high cholesterol then make another video to go with it for smokers, drug addicts, and those who were healthy, fit, lean and muscular, and STILL got all the medical problems. Because I do not like to feel like I’m being attacked, especially by those people who are trying to ‘help’ me.

PS: This is not an attack on thin, skinny, anorexic or bulimic people. I’m just trying to make a point.

Follow At The Wrong End Of The Gun on WordPress.com